Three is the magic number

Kirsty Bashforth examines the three aspects, strategic, social, and political, that need to be included in helping to change or maintain the desired culture within an organisation.

Culture is an oft-used word with many variations in what people are really referring to when they use it. Just like the word “performance”, it can descend into a catch-all term that can lead to fuzziness, confusion and talking at cross purposes.

So getting clear on how organisational culture really works starts with establishing a consistent definition of the term. I define it as the total summation of all aspects of the “way it is around here.”

That includes perceptions, symbols, legacy habits, tone, practices, myths, communities, networks, assumptions, language and more – all adding up to the totality of behaviours and decisions across an organisation – and also how customers, suppliers and other stakeholders experience it.

It is not, then, simply a case of the words on a wall or website. And it is not necessarily just what we can see. So how do you get to know what’s really going on and how might we get to grips with it if we want to shift it?

First, we have to look at both the formal and the informal. (See Figure 1.) Think of this as a triangle: the point at the top being the formal aspect; the other two points below are informal. 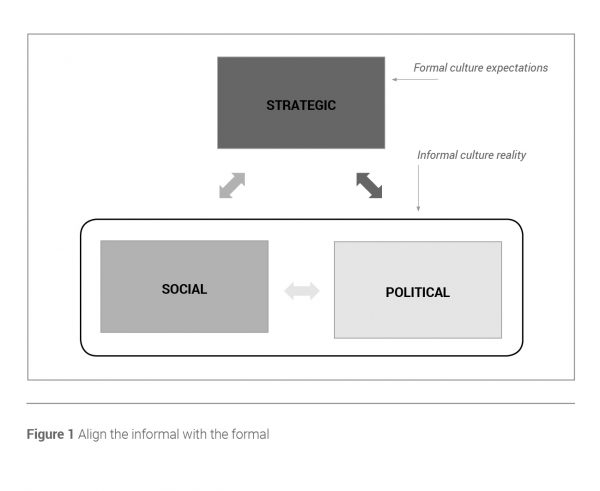 The formal is the clear statement of intent and expectation around a culture; I call this strategic. It is what we see on the website and the positioning alongside the brand of an organisation and what we refer to in governance and publicise when we are seeking to attract talent. It is the statement of intent around culture.

Of course, you want and hope the bottom two reinforce the top one – but you have to work hard on this because there is a lot to overcome that is not always obvious.

As human beings, we have our own ways of doing things and unless we are incentivised and restricted in equal measure into a certain approach, we will carry on doing it the way we think best, whether that is the way culture defines it or not. We do not simply do what we are told with no variation.

This is behavioural economics in action: faced with the same data, we make different and sometimes unpredictable choices. We all have backgrounds, contexts, ambitions, loyalties and habits. And we choose to work in ways that we know work best for us – unless we are incentivised to work in another way or prevented from our current ways of working.

We may wish that everyone simply worked to the expected culture of their organisation (the strategic, formal intent) but without oversight and overt governance of it, the informal will drive what really goes on and it may well be different from those formal expectations.

What then are those two informal parts of the culture that we may not always see but so badly need to pay attention to?

The first is the social side – the communities in which people work, the networks and old connections through which they “get stuff done,” the practices and habits that are the way things “have always worked around here.” People may gravitate towards certain individuals they may have worked with previously and been successful working in a certain way for decades. It’s just what works and how it is.

Particularly in organisations where long tenures are still prevalent (say manufacturing or the civil service) people have found their own ways to achieve goals, their own places to seek advice and their own “workarounds” for getting stuff done.

Inherent in those behaviours and actions are a set of cultural assumptions about what is acceptable, important and prioritised. These may well be subconscious assumptions but they are there nonetheless.

The second is the political side – how decisions are really being made when it comes to the crunch (one individual dominating a meeting, for example, or a “side-bar” conversation outside the formal process of who is supposed to be influencing whom).

Whom people choose to follow, whether they are their boss or not, casts a longer leadership shadow in behaviours and the sorts of pressures and incentives that are subtly or overtly influencing the way leadership makes decisions.

Perception matters here: a colleague may assume the way decisions are made or that certain decisions will be made and thereby second-guess the situation (“because it always seems to end up that way, no matter what they say”).

All three of these angles – strategic, social, political – add up to form the way an organisation is really working. And I can pretty much guarantee that unless you have been actively overseeing the culture in your organisation, then the informal will be over-ruling the formal; or at least may mean that only aspects of your formal expectations are being followed through.

Do not just rely on one view of how this is working; try for a 360 view if you can. Remember your own view will only offer one lens. Ask colleagues, customers and suppliers about how things truly show up. And remember to hold a mirror up to leadership as well.

And never forget through all of this that the global aspect of the business means behaviour is also understood and experienced differently depending where you are in the world. Always trying to understand what other geographical nuances may mean is vital.

Now, if you have got underneath the skin of this and have a decent grip on the culture that you really have in your organisation, here are some tips on how to tackle this seemingly amorphous challenge and to stop you falling into the usual traps.

Remember, then, it’s never enough to assume that you can see and hear all that your culture is: you need to dig into the mindsets, backgrounds, perceptions and assumptions as well. Observe the habits, the language and often what is not said. Be pragmatic, look at it from several angles and approach it as a craft – not as unmeasurable as a piece of art and never as precise as a scientific formula.

It is manageable: just have your eyes, ears and senses on alert to be able to spot what’s really going on, across all three points of the triangle. 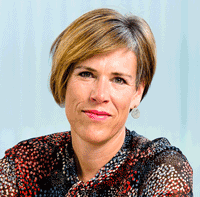