The future of diversity and inclusion: Can leaders scratch beneath the surface?

We have recently seen the boom of chief diversity officer roles and teams, many within the HR and talent management portfolio. However, the reason leaders find it hard to make the kind of benefits that can accrue from diversity and inclusion is that they only scratch the surface; most looking at measuring the main categories of diversity, gender, age, ethnicity and culture often from a “quota” perspective.

What they should be working on is entrenching diversity into the business value chain and taking into account the organisation’s diversity of thought, an individual’s belief, their values and diverse personalities. It is only by understanding the individual’s motivation and drive, can you begin to unlock their full capabilities and commitment and align those with the company’s needs.

In this way, employees will take full ownership for their contributions to the business objectives.

To investigate this question deeper, let’s go back to the fundamental question of what is diversity? A web search reveals different perspectives: one states: “…understanding that each individual is unique, and recognizing our individual differences.” Another defines it as …an instance of being composed of differing elements or qualities: an instance of being diverse. A diversity of opinion.” And for inclusion: “….the act of allowing many different types of people to do something and treating them fairly and equally.”

The first definition relates to talent diversity. Most organisations today measure the diversity of their internal talent pool with classifications of gender, age, ethnicity and culture. Compared to the definitions above, current diversity metrics seem to go against the true meaning of the definition.

Grouping people using these diversity metrics ignores our core uniqueness as individuals and our true diversity as individuals from our past history, experience, and also our present and future in terms of our passions and impact that we want to create.

In addition, this kind of narrow view of diversity can create new biases and strengthen old ones. One example is the trend in the US where women-based organisations are being sued for discrimination against men, including colleges who have been sued for women-only scholarships.

These and other cases are being resolved by ensuring that the programs are inclusive and discussions on where the line should be drawn are ongoing. This doesn’t mean that all current diversity metrics should be ignored or eliminated. But rather how do we see diversity and inclusion beyond the current “metrics” lenses?

Bringing the human back

To address this challenge, it is important for organisations and their leadership teams to go back to basics by stressing the importance of appreciating “individual uniqueness.” This process aligns the deeper values and purpose of the “employees with the companies” values and mission in addition to the current metrics.

In our work with corporate leaders, we see that an increasing number of boards are asking their high-potential talent this in internal promotion assessments: “What do I stand for?” Having conversations about the why with people, and taking time to help them understand “Who am I?” and “What do I stand for?” has become a core element of the talent management strategy in forward-looking organisations.

Our career relaunch & ahead programmes, for example, help people who are looking to relaunch their careers – after a career break or mid-career reflection. These conversations reveal an increasing focus on helping professionals clarify their development pathway to build their personal brand around a combination of their past, their present, their strengths and their future. This reflection helps them define their passion and the impact they want to create in the world.

Rather than only looking at their past – their previous work experiences and track record.

This information can then be used by them together with their current or new employers to plan their next career move beyond the traditional career silos and tracks. As more and more organisations move towards agile transformation, many of our corporate partners have shared that it is imperative for them to transform their organisation starting from the human factor.

For example, we use the Beyond Leadership vehicle in our workshops that was created more than a decade ago by the former managing director of Dell Germany, Patrick Cowden, which aims to help companies unleash their potential by starting with understanding and respecting the human factor at the core and starting the deep conversations early.

While many leaders recognise that talent is crucial to business success and social value for companies, many still understand little about the value of their “most important asset” – their workforce on which the companies comprising the FTSE 100 alone annually spend over £200 billion according to CIPD.

So how can we measure that? In my conversation with the talent analytics team at a global pharmaceutical company, it was suggested that in addition to looking into the common diversity and inclusion, why don’t we also look into personality metrics and psychometrics as an additional indicator. This helps us look beyond the few mainstream diversity metrics and also avoid looking at the past but more into the future.

And more importantly, companies that create an environment that respects and celebrates the unique differences in behaviours while integrating it into processes, structures and systems within organisations are the ones that will win not only the war of talent but also in long term business sustainability.

They are currently undertaking exploratory analyses on the topic of diversity—analysing demographic factors collectively, as opposed to individually. In addition, the company is analysing personality attributes, combining these with demographic factors, to determine if there is an optimal combination of “diversity” among leadership teams, which enables better decision-making and performance.

It is important to note, however, any tests that aims to classify individuals and simplify the complexity of what is it that makes us humans unique will still contain a certain degree of bias. So what can leaders to reduce the bias in their usage of data and enable better and more efficient decision making?

It is interesting then to look at a project that aims to tackle this problem. Many automotive companies now have self-driving features in their offerings. This has led to a business and moral question that many have brought up. Instead of keeping the decision-making power to a few selected individuals in the company, Iyad Rahwan tries to answer this question holistically in his project coined the MIT Moral machine uses crowdsourcing and gamification in the collection data.

Anyone who has access to a computer and WIFI can provide their input based on a number of scenarios hence collecting perspectives not only from diverse individuals but also encouraging individuals to create the scenarios that they may experience day to day.

Within 18 months, the online quiz had recorded 40 million decisions made by people from 233 countries and territories. Even the automotive companies have taken notice.

In an article, Barbara Wege, who heads autonomous-vehicle ethics at Audi, says surveys such as the Moral Machine can help to begin public discussions about these inevitable accidents that might foster trust.It may not be possible to go to these lengths in many of the cases, but it is important that a culture that welcomes diversity of thought and challenge is established.

Certainly, in the future, talent will be more diverse, and only companies that are able to make use of this different group, will be able to take the full benefits. Changing views to embrace this will add to better decision-making and innovation. That argument needs to be won.

With this approach, business leaders can better connect the results of their diversity and inclusion efforts to their long-term business performance as they start to explore new ways where they can crowdsource or democratise their decision-making and use it as a channel to drive crucial topics and public discussions.

Tackle diversity of thought not of people

One scenario, for example, is to look into how companies can better measure diversity of thought in brands? Silvia Raks shares in her article: “Brands touch the lives of various stakeholders every single day: employees, customers, business partners, media, passers-by. They watch and feel every action done by every single person involved in building a brand. Every detail has an impact on how a brand is being perceived.”

How can companies foster diversity of thought? A Deloitte 2013 report called Diversity’s New Frontier states: “Diversity of thought goes beyond the affirmation of equality.” Leaders need to broaden their scope beyond the current metrics and focus on creating an agile learning culture and environment for diversity and inclusion strategies. Where people feel that they are allowed to try, make mistakes, learn from each other, reiterate, review and try again to find an approach that makes sense for the business, the social impact and their teams.

It is only when leaders take a step back and look at the topic of diversity and inclusion beneath the surface and constantly adapt the use of their diversity and inclusion initiatives to the meaningful impact that they would like to achieve, then the future frontiers of Diversity and Inclusion would continue to be powerful, impactful and everlasting. As Charles Darwin in one of his well-known quotes says: “It is not the strongest of the species that survives, not the most intelligent that survives. It is the one that is the most adaptable to change.” 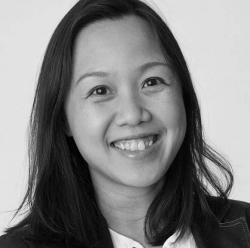 Digital transformations fail to meet their original objectives at a rate of 70% to 95%, with an average of 87.5%. What is the learning curve for #digitaltransformation, and what are the three states required for success?