The evolving role of the ‘Professions’

What does it mean to have a ‘profession’? Ansgar Richter explores the evolution of the concept, and how business schools can develop future-proof education for professionals

‘To educate future generations of professionals’ is an important aim of many business schools. A significant proportion of their graduates end up in more traditional professions such as accounting and auditing, and many others move into sectors that rather consider themselves ‘professions’ in a looser sense, such as management consulting. Many of the occupations into which business school graduates move also associate themselves with the ‘professional’ label, from human resources to marketing, supply chain management and beyond.

At the same time, concerns about the future of the professions abound. Over the past twenty years, all of the big accounting and auditing firms, for example, have faced criticism of their failure to avert or uncover accounting scandals, and about their overall ‘professional independence’. They have also given in to the desire to integrate vertically or to diversify their business models in order to access more profitable service lines, raising concerns that the core competencies on which their original professional identity was based might be diluted or compromised. Professional service firms have evolved into more regular businesses, and so have lost some of the sheen of being above the commercialism that characterises the business world.

The professions as we know them today are a product of the nineteenth and early twentieth centuries. Their rise since the late phase of the industrial revolution was driven by population growth, trade, the development of modern, organised societies guided by rules and institutions, the explosion in scientific research and discovery, and the growth of large-scale commercial organisations. The traditional professions – medicine, law and accounting and auditing – were built on a factor of production that became increasingly powerful and indispensable, namely knowledge and expertise. Acquiring such knowledge is time-consuming and difficult, thus it can only be held by relatively few. The dominance accorded to expert knowledge gave its providers a position of power over those who needed it, be they individuals or collective organisations.

In the course of their development, groups of professionals were successful in establishing and protecting dominance in their fields of expertise, by:

In addition to these traditional professions there emerged others that share some but not all of these three characteristics. For example, the CFA Institute has become a recognised body in finance, but the CFA qualification is not as strict a prerequisite for finance professionals as training in medicine is for medical doctors. In management consulting, the underlying body of knowledge is fairly ill-defined, so it is hard to set generally accepted entry standards. In this situation, industry bodies such as the International Council of Management Consulting Institutes (CMC) or its national member organisations, have remained relatively weak.

Most of the big management consulting firms have remained unaffiliated with these bodies, relying instead on their own brands as signals of quality and expertise.

What we see here is an almost dialectic development: with the rise and success of the professions, a lot of semi-professions have emerged, diluting the very ideals that had made the professions successful in the first place.

Another development – and this gets us a little closer to the question of what the future holds – is the rise of new, mixed forms of professional expertise. For example, many of the major accounting and auditing firms have moved firmly into legal services as well. Or think about the rise of forensic accounting, or of firms such as the Berkeley Research Group that blend regulatory law, industry economics, and data analysis. If it is becoming harder to regulate the professions, that is because the advanced expertise on which they rely becomes more intricate and complex, and subject to fast-paced change.

There are even more fundamental concerns about the long-term future of the professions, however. In their book, “The Future of the Professions”, father and son Richard and Daniel Susskind argue that the rise of data analytics, artificial intelligence and machine learning, and of autonomous systems, will not only change many professional services, but could render them obsolete. The pair believe that modern technologies do much more than just organise and distribute expert knowledge more efficiently. Artificial intelligence and machine learning, when applied to ever larger swathes of data, can also generate knowledge more quickly, and solve problems more effectively.

For example, pattern recognition may be better than human experts when it comes to identifying accounting irregularities or precedence in legal disputes. The book also provides examples of how computers can engage in creative tasks. And information technologies can provide diagnostic analytics in ways once considered the prerogative of human experts. In sum, Susskind and Susskind argue that there is hardly any human competence that, if considered in isolation, could not be carried out by IT, at least in principle.

These examples show that new technologies are changing the face of professional services.
The new professions may well be unrecognisable from our point of view today. Although Susskind and Susskind’s analysis is well-informed and thought-provoking, my own view on the future of the professions is more optimistic than theirs.

I believe that by and large, IT has complemented and thus supported the professions and opened new opportunities to them. You could even argue that AI and data analytics have reinforced, or widened, the power distance between professional service providers and buyers. That in itself may well be a problem. Take the example of Cambridge Analytica, a consulting firm of sorts that went bust after it became public that the company had used data from millions of Facebook profiles in order to develop microtargeting strategies which influenced the 2016 American elections that brought Donald Trump into power.

In the future, I thus believe we will see more ‘cross-over professions’, lines of work that involve competencies from across different fields. The intersection between data analytics and finance is just one such example.

Moreover, there are reasons to believe that humans do have some competencies that for the moment, at least, computers and AI systems cannot easily match, including the ability to:

In the future, I thus believe we will see more ‘cross-over professions’, lines of work that involve competencies from across different fields. The intersection between data analytics and finance is just one such example.

Of course, how exactly the new professions will look, we cannot know. Nevertheless, I believe the general points made above have significant implications for students and for providers of education:

In sum, I believe that the notion of professions as fields that are neatly organised according to particular bodies of knowledge will, in the long run, become obsolete. However, professional skills that involve using knowledge from diverse sources, interpreting them, and turning them into actionable insight, will gain in importance. If they are to stay relevant, business schools have a key role to play in this regard. 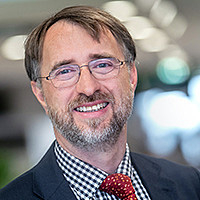