The building of a tropical impact school

Driven by their stakeholders, business schools worldwide are renewing their strategies and practices to increase their impact on society. This article tells the story of the São Paulo School of Business Administration, part of the Getulio Vargas Foundation (FGV EAESP), and how it has changed over its six decades of existence, adding research and impact to its original teaching mission.

From teaching to research to impact 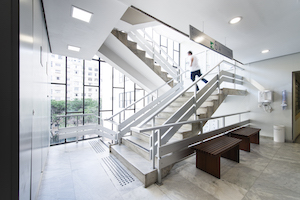 The FGV EAESP has its origins in the cooperation agreements established between Brazil and the United States in the 1950s. It was a mission from Michigan State University that helped create the school in 1954.

One of the first steps when setting up the school was to establish an advisory commission with 42 leaders from education and industry. This commission went on to help establish connections with the Brazilian business community that have been consolidated and flourish until today. At that time, Brazil was rapidly industrialising and urbanising, and with the city of São Paulo at the forefront of this movement, FGV EAESP had the mission of preparing managers for the emerging economy.

By the 1990s, the school was well-established, recognised locally for its excellence in teaching and its innovative approaches to management education. Its alumni held leadership positions in Brazil and MNEs operating in the country.

In the late 1990s and early 2000s, two simultaneous movements helped change FGV EAESP. The first was internationalisation, followed by the AACSB, EFMD, and AMBA accreditations, which stimulated research and academic publications.

This was accompanied by Brazilian regulators who also fostered knowledge production, and this started a “scientific turn”, transforming the school into a research institution. It was mainly a top-down movement, with the creation of research groups and the introduction of new practices to support research and publications.

“By the 1990s, the school was well-established, recognised locally for its excellence in teaching and its innovative approaches to management education”

However, a second movement also deeply affected FGV EAESP. In the 1990s, Brazil was undergoing major economic and social changes. Democracy was consolidating and the economy was liberalised, while companies as well as social organisations and the government all faced enormous challenges. 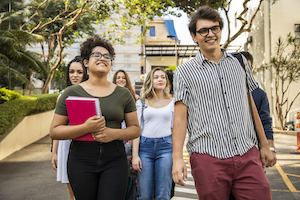 With its location in the commercial, financial, and cultural centre of São Paulo, Brazil’s largest city, and with decades-long connections with the business community and society, the school was naturally asked to help develop solutions to these problems.

As the result of a succession of initiatives, the applied research centres attracted researchers who dealt with a plethora of themes from sustainability to health management, public management to financial inclusion, ethics to public security, innovation to infrastructure, and many more.

Today, FGV EAESP has 20 applied research centres, with approximately 130 professors, 100 researchers, 180 students, and 100 colleagues from other institutions involved in more than 100 projects per year. 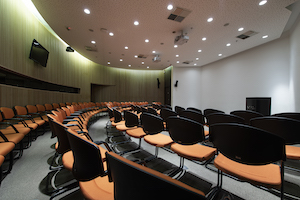 In a typical year, these centres organise approximately 100 public events with over 10,000 participants and publish approximately 150 papers, 70 reports, and dozens of articles in the business and general media. Its experts are frequently featured in the local and national news in newspapers, magazines, radio, and TV.

Over the years, the school has developed a dual research system where academic research groups doing research aimed at publication in top local and foreign journals coexist alongside applied research centres. The two cooperate closely, with many professors contributing to both academic and applied research, thus adding rigour and relevance to the school’s work.

The applied research centres also have a profound impact on teaching, as they help bring the “real stuff” into the classroom and take students into the real world of business, social organisations, and government institutions.

Looking back, we can say that three characteristics have been fundamental for the success of the dual research system and the applied research centres:

FGV EAESP faculty may feel proud of their achievements; however, professors and researchers also feel the need to go further, as, on any given front, there is much more to be done. 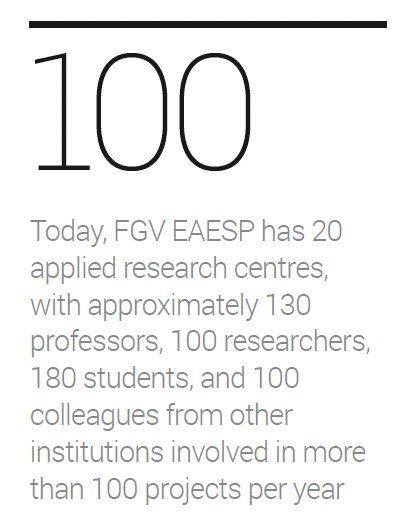 Considering the way forward and the need for more impact, we can identify important challenges. The first is to promote cooperation between the applied research centres and similar groups in other schools in Brazil and abroad. As problems become more complex, it is necessary to join forces to address them.

Another challenge is improving the strategic process of applied research groups. As these groups grew organically, meeting specific demands from their stakeholders, they faced a certain lack of strategic coherence which may lead to a lack of clear goals and the dispersion of resources and energy. As in corporate life, a certain dose of strategic focus is essential.

A third challenge is stimulating knowledge co-creation, with academics closely and openly cooperating with practitioners. Applied research fundamentally depends on the systematic interaction between theoretical knowledge and practical knowledge.

A final challenge is further connecting applied research and teaching with an emphasis on executive programmes. Bringing complex problems to the classroom will help educate managers and give them a renewed sense of citizenship and social responsibility.

A new archetype for business schools 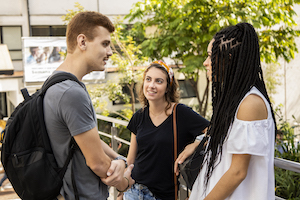 The FGV EAESP story may seem peculiar, and it certainly is, due to its long tradition of close connections with the corporate world. However, it also reflects a global trend concerning business schools, with the emergence of a new archetype that is more capable of responding to the demands of twenty-first-century society.

The first archetype was developed in the early twentieth century and lasted until the end of the 1950s. Business schools were professional schools with little space for research, and the main objective was educating managers in the emerging manufacturing industry.

The second archetype emerged from the end of the 1960s onwards, with the valorisation of research and publications. Management needed to become a science. This helped to give rise to a vertical model, which was consolidated into two silos: the first is based on MBAs, with a strong commercial orientation, and is focused on rankings as a quality proxy; the second is based on PhDs, with a strong academic orientation, and is focused on publications in top journals.

The third archetype, already in the making in business schools, can be seen as a horizontal model instead of the vertical model of the second archetype. It assumes a business school view based on two components. 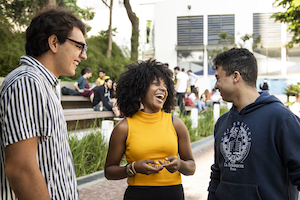 The first component involves the creation and organisation of knowledge. Knowledge creation comprises traditional research activities but with a greater emphasis on application. Decades of scientific research have generated vast knowledge in all fields of business and management; however, it is necessary to translate and organise this knowledge to enable managers to apply it.

The second component involves the dissemination of knowledge inside and outside the walls of the school. It is based on multiple channels, such as courses, publications, and many other possibilities. The horizontal perspective implies that we see teaching not as an end but as a means of disseminating knowledge; this is strongly nourished by the first component.

From the predominant vertical model to the emerging horizontal model

In this third archetype, the obsession with rankings loses its meaning, and hermetic publications in top journals cease to guide the academic career. The new orientation implies that research agendas are established in tune with social demands and that the structure and practices that support research activities are realigned. 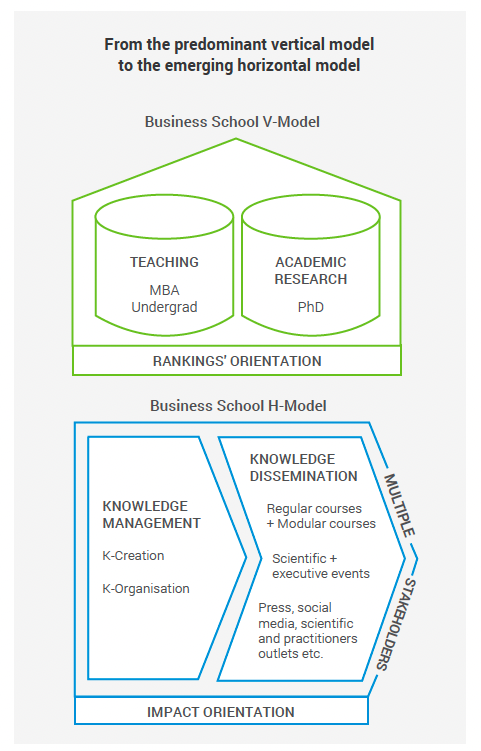 In summary, adopting the V-model perspective leads us to view business schools as knowledge management systems and as vectors of social transformation. Such a view also implies recognising the existence of feedback streams, which originate in the multiple external stakeholders impacted by business schools. These feedback streams act as channels of expression and influence on the external agents of the school.

Business schools teach their students that adaptability to the environment and constant rebuilding of business models is essential for the longevity of organisations. This is a good time for the business schools themselves to practice what they teach. The FGV EAESP (a work in progress) story demonstrates that different paths are possible. 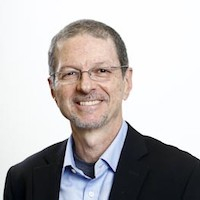 What will CLOs focus on this year? 37% surveyed plan between one and five executive learning programmes with external providers during 2022. Learn more in the latest survey from the @FinancialTimes. #executiveeducation

Leadership is the top learning priority for executives https://on.ft.com/3LyboOk