Techno-humanism: If algorithms make all the decisions, who is the leader?

At the EFMD Special Interest Group (SIG) “Innovation in Leadership” kick-off in March 2018, I called for our group to help innovate leadership in the context of rapid digital transformation and ambiguous globalisation.

A year later, the SIG facilitators, Nigel Paine and Roger Delves, note that the challenges faced by the 12 companies involved were almost identical, none were satisfied with their current leadership development offerings and all urgently wanted to change.

The outcome of this one-year journey is summarised in their eight “beliefs” about the future needs of leadership development:

Having worked at seven business schools and been engaged in many leadership development programmes, I am a believer in these eight precepts. But I suggest that the pace of digital transformation and globalisation is outpacing these eight beliefs. In this article, therefore, I call for even greater innovations in leadership because while we typically overestimate short-term impact we underestimate the consequences of technological change.

We need to prepare ourselves for how to lead and develop leaders in view of the following five trends:

1. A cacophony of signals threatens our inner voice

As the primary philosophy of the liberal world order, humanism assumes we can find the answer to difficult problems by connecting with our unique inner human sensations, emotions and thoughts and allow these inner experiences to influence us. When in doubt, leaders can sit at their desk, close their eyes and listen to their inner deliberations in order to find the answer to a difficult dilemma. But few leaders can now distance themselves from the loudness of signals received from face-to-face meetings, telecoms and through cyberspace. Meditation and mindfulness practices may help but listening to our inner voice remains challenging for many. To deal with this, one of the SIG group’s eight beliefs is that the digital transformation going on inside organisations should be mirrored inside leadership development. Using Ashby’s famous Law of requisite variety as a metaphor, I suggest it is also vital that leadership teams develop the skills and have the diversity that enable them to comprehend technological advances outside their organisation. Not only do these advances result in new products, services and systems but they also challenge, and even threaten, the very notion of trusting our inner self.

2. Be prepared for megacycles

Over past centuries, revolutionary technologies have always generated a few decades of speculative, early hype-cycle growth followed by bubbles that burst, followed by another 20-30 years of growth based on healthy profits. According to historian Carlota Perez, the current cycle began with the early information and communication technologies in the 1970s. Predictable, speculative growth created a bubble in the 1990s, which then popped around the millennium . We are now enjoying the second period of sound, accelerated growth. As per Perez’s cyclical patterns, we are now on the precipice of a few more decades of sound growth before another revolutionary technology kicks in. In fact, the next megacycle is already at the door – the “Internet of Things” with its ubiquitous data collection across platforms and artificial smartness (different from human intelligence). But there is no way of stopping it because technology breeds more technology and the “technium,” as Kevin Kelly calls it, develops and procreates sometimes out of control. Leaders must deal with this faster pace of technology and the prospect of decades of accelerated growth.

In addition to the zillions of CCTV street cameras capturing our every move, continuous data collection from advanced sensors on or inside our bodies will gradually have enough data to outrun whatever inner voices we have. Shared data from wearable fitness products is just the start; we can already replace dysfunctional or lost body parts with technology, and neuroscience is evolving so rapidly that eventually humans and technology are bound to merge even more. Add to this advancement in gene editing and whatever is our authentic self will be up for question.

In his recent book Future of Mankind, physicist and futurist Michio Kaku speculates this will happen gradually over decades and even centuries. But I think it will be sooner. In fact, it is already here: digitally-equipped teachers track their primary school students by monitoring every question and answer, facial expression, heart rate and emotional mood.

Facebook, Google, Amazon, Twitter, Baidu, Alibaba, and other tech giants have data about everything we do, think, and feel. The capacity to track what we say, read, watch, like and buy means real power not only to sell us legitimate products or services but also to incite our emotions and influence our values, as the Cambridge Analytics scandal demonstrated in the 2016 Brexit vote and the US elections.

In his Homo Deus book, Yuval Noah Harari not only skilfully deconstructs humanism, he outlines a scary possible future based on this kind of Dataism, as he calls it: non-conscious but highly intelligent algorithms may soon know us better than we know ourselves. Who will win, man or machine? How will this kind of tech-humanism transform leadership and leadership development?

Today, we can collect and analyse vast amounts of data quickly to make decisions. Google Analytics, Tableau, Salesforce and similar tools give leaders dashboards on their desktops that are vastly more effective than older “expert systems”. It is conceivable that in the near future, employers will have access to interactive and continuously self-improving algorithms that quickly learn everything you need to know about current and potential employees, even to the point of infringing on personal privacy. But imagine you walk into a performance review with your authentic self-assessment and it is matched against what an “HR algorithm” concluded. If it helps performance reviews and difficult conversations, would not that be just great? Maybe.

Which assessment should a manager trust? Should we continue to trust our “authentic self” more than the dashboard data findings? Who is the real expert system? And what then becomes of leadership?

This digital transformation of me, challenges the very idea of individualism at the heart of Western societies; that I am an autonomous individual with an authentic self at an inner and private sphere. The scenario is troubling, suggesting that an algorithm may soon come to know my no-longer-private inner being better than I do myself.

The consequence is that others, for example, a manager or even the company algorithm rather than I, should be entrusted with making decisions for me instead of me.

This is not just the imagination running amok. As I write this, the April 2019 issue of the renowned journal Scientific American features as its main story the “mind reader,” a new brain-machine interface that detects what the user wants. What if we soon can do the opposite? Would that programming be “leadership” too? This development taken a bit further resembles the creeping totalitarianism that Hanna Arendt so skilfully detailed in her fact-based 1959 book The Origins of Totalitarianism.

It also feels like dark and updated versions of what George Orwell and Aldus Huxley captured in their famous dystopias from the 1930-1940s. Is this prediction going too far? Not really, as some of it is already happening and not only in the Black Mirror series on Netflix. The fast-growing Chinese Social Credit System gives a “trustworthiness” score to citizens based on an algorithm that extracts data from all of the person’s digital platforms. In early 2019, the system judged tens of millions of people in a few Chinese provinces to have sufficiently low scores to ban them from travel by train or air.

It is only a few more steps to extend such bans to include attending school, getting a job, moving to big cities, or even getting married and having children. How should leaders react to this technology if it is exported, which is likely? In the face of these trends, we need to go beyond the eight beliefs to further innovations in leadership development. Peter Drucker famously stated that leadership should be seen as both a liberal art because we need to draw on all the knowledge from the humanities and social sciences as well as a practice because we have to focus on effectiveness and results.

This duality is truer than ever. The ultimate goal, as Aristotle said, is that leaders need to develop a habit of making context-specific decisions that reach above their egoism in order to sustain the community or society they are part of. Experiential learning, reflection, group and peer learning, integrated and continuous processes certainly help drive transformational change and increased resilience of leaders and organisations. But, if these five trends are for real what else must we do? There is still much discussion to be had and challenges to overcome. 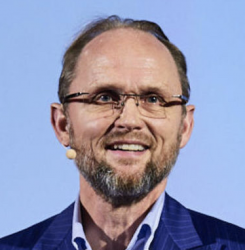 I may have got all my timings in a muddle today 🙈 but finally at the airport and really looking forward to joining other global Business School Deans and Directors in Madrid for the @EFMDNews 2023 Conference. https://hubs.la/Q01yfjtc0