Scholarly impact and the co-production hypothesis

How can we make academic research into management more relevant to practitioners? Andrew Pettigrew has some suggestions.

There are a number of hypotheses one can make about how this situation can be improved; how research into management issues can be both of a high scholarly quality and of real use to practitioners. In other words, how do we give management research “scholarly impact”?

The first hypothesis is that scholars in the area should have the aspiration to do both scholarly and practical research work – to tackle the “double hurdle”.

The second concerns the quality of relationships held by the academics and the ability sometimes to work through “knowledge brokers”, or intermediaries.

Third is the quality of ideas.

Finally, the key hypothesis concerns the co-production of research by scholars and practitioners.

Research into management often seems to be a dichotomy – you either have an impact on scholarship or you have an impact on the worlds of policy and practice. But rather, we should aspire to meet a double hurdle, where we seek to do work that has both a quality of scholarship and a practical impact.

The current reality, of course, is that people diverge and define themselves either as a scholar, spending all their time writing articles and books and others who define themselves as an applied researcher or consultant and don’t worry too much about where their work is published but much more concerned about who they can influence in the “real” world.

It’s rare to find people who aspire to produce work of the highest scholarly quality and deal with practical issues at the same time. Our aim should be to encourage people to aspire to this.

It will involve a cultural change that will shift people’s focus from publishing output, writing articles and books – which to me is an intermediate good – to the final good, which is having scholarly and practical impact. A lot of the incentive systems in academia have unwittingly focused people on the intermediate good.

This is not to decry the value of published research but somehow we have to turn people’s gaze from this intermediate good to the final good. And that will not be easy.

Another issue is the problem of engaging with potential users of research. The one thing we know about user engagement is that very often it depends on how particular issues are regarded at the time by potential users – are these issues rising or falling in their list of priorities?

Often, too, they become interested in something because they know, or have heard of, the academic involved. It’s really about brands. For example, Michael Porter is a “brand” and therefore what he says is likely to generate interest and to be accepted as authentic. The same is true of certain research centres and other institutions that have gained general public acclaim. The Centre for Economic Performance at the London School of Economics, for example, can be characterised as such a brand, as can the respected Institute for Fiscal Studies, also in the UK.

And it is because they are so influenced by branding, by the reputation of individual academics or of the centres where they work, that potential users of research can be fickle.

If the director of an institution changes, something goes with him or her. Some users may walk away because their allegiance was to that person.

So user receptivity is unpredictable and person-dependent. It’s built on relationships.

As an academic, you can come forward with some really great concept or idea – let’s say it’s about technological change and find that there’s absolutely no interest in it whatsoever.

Three years later, something has stirred up the political nest, and everybody is fixated with technological change.

This means that academics have to be visible over the long term. They have to have sustainable long-term relationships.

Some of them may know that intuitively but my feeling is that they don’t go out and deliberately build networks.

But if you want your work to have impact then you must be a networker. You’ve not only got to have relationships, but you also have to know how to sustain them and how to exploit them.

And these networks must be global. One of the problems I see at the moment is that too many European academics are becoming rather self-concerned with their own academic institutions. This is fine. But if it is at the expense of neglecting North American institutions then it is a mistake. Networks must be global, and building networks in North America is particularly important to this.

These networks should also extend to the corporate world. If you are an expert in, say, the financial services industry you need to know chief executives, senior people, strategy people in the big banks.

It also means having networks inside government, knowing senior civil servants, consulting firms, think tanks, even journalists, who often act as translators and amplifiers of academic work in the management field. The fact that someone writes about your work in the Financial Times makes people interested.

“It is because potential users of research are so influenced by branding, by the reputation of individual academics or of the centres where they work, that they are so fickle.”

The quality of ideas

To me, that is fantasy and trivialises the problem. I’m not denying the importance of dissemination or skill in writing or talking because we are in the influence business and people influence through the written and spoken word. But no matter how good a communicator you are, if you ask the wrong questions and pose them in the wrong areas then no amount of accessible or skilful communication will produce any sort of impact.

This leads on to the key hypothesis of co-production.

I can sit here and work on my own or with other academics, and that’s fine. But if I go out and say I want to work with McKinsey or PwC or whoever on this, that doesn’t mean setting up an advisory group so that they come here and give me advice.

Co-production means the involvement of partners throughout the complete cycle of research. First, it involves the scoping and direction of a research project; second, the commissioning of research; third, the leading and managing of research; and fourth, the delivering of the research results and ensuring their impact.

The hypothesis here is that early and continuous engagement increase the probability of impact. There is no set model for co-production and it is encouraging that many scholars are now willing to experiment with various forms of engagement to see which works most effectively.

Of course, the complete antithesis to co-production is what one might call “smash and grab” research, which, amazingly enough, is still going on. Smash and grab research involves a highly unilateral state of affairs where a scholar can gain access to an organisation, go and grab the information and data, and then write it all up in scholarly isolation.

“No matter how good a communicator you are, if you ask the wrong questions and pose them in the wrong areas then no amount of accessible or skilful communication will produce any sort of impact.”

Not only is this unfair to the organisation it is also unfair to other scholars who may come along later and be refused access to the same organisation because of the poor behaviour of their predecessors.

Co-production depends on relationships. You can’t do it if you don’t get out beyond the boundaries of the university and meet people, engage with them, talk to them and develop good personal relationships so that they say “well I don’t mind working with this guy, it sounds OK, we might get something good out of it”. To me, it’s fundamentally about relationships building and also about a willingness to experiment.

The corporate world is much more open to this kind of thing than you might imagine. But again it’s often very person-specific. You can go to x number of people in a big company and most will be indifferent but you will find some people who see the value in it.

They see the value because they are going to learn from direct engagement with the scholar and be capturing the findings earlier, not waiting to read a great academic tome three years down the track. If you’re working as a team then you are capturing the value as the value is being created rather than waiting for it to materialise.

Other things you can do if you are engaged like this is to help shape the project – and that increases the commitment of the person to the process. And they are also much more likely to co-fund if they co-produce. Now of course this has been going on for years in areas such as engineering; it’s nothing new, it’s not some great invention.

Of course, this may be seen by some academic as very close to a form of consulting, as not “pure” research but “getting into bed with the devil” and becoming an applied researcher.

But it need not be. Academics can fashion and shape the work so that all the interests of the various parties are met without compromising the important academic values of independence.

It is perfectly possible for scholars to manage the duality of high involvement with users and high independence from those same users. In doing double hurdle research it is important that we maintain the capacity for iconoclasm and challenge.

My own experience of working with people in business is that they are interested in ideas and concepts in their own right and that they are quite willing to be challenged with important ideas on important subjects. 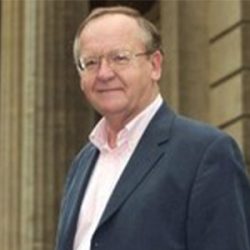 Andrew Pettigrew
Andrew Pettigrew is Dean of the University of Bath School of Management in the UK, Vice-President of EFMD and a noted researcher into the human, political, and social aspects of organisational strategy.