Fredrik Andersson welcomes the growing debate on “responsible research” but wonders if it goes too far or not far enough.

“Imagine a world where business or management research is used widely in practice by business and other non-business organizations to improve the lives of people in our societies.”

This is the tag line of the “Responsible Research in Business and Management” (RRBM), initiative. Going further into the details underlying the initiative and its seven principles articulating the desirability of stakeholder involvement, impact, and multi-disciplinarity, there is much to applaud.

In my view, however, the initiative – like other responsible research initiatives by, for example, the European Union – needs critical assessment. In short, the broader discourse underlying and surrounding these initiatives (and exemplified by the tag line) expresses a narrow concept of social benefit and a simplistic notion of social progress that risks constraining research.

I started writing this piece in Lund, southern Sweden, towards the end of January. Outside, I could see the beginning of what seemed likely to be a spell of unusually cold weather. If this would have turned out to be the case, it would not only confirm some of the weather forecasts for the winter but would also, as far as I understand it on the basis of some interest but no expertise, bear out a prediction about the consequences of the warming of the Arctic region.

There is nothing strange there; the warming of the Arctic region changes the pattern of atmospheric currents and the result is likely to be cold and late winters. I have seen scattered examples of this being used as corroboration of climate change skepticism or denial. There are two simple points here:

First, the example of a cold winter corroborating global warming requires trust in non-trivial scientific knowledge. Second, those of us who are convinced of this must be careful not to reflexively cry wolf whenever there is a storm or the weather is unusually warm or otherwise exceptional.

What I see less trivially, though, and more controversially I am sure, is that the example illustrates a risk that is a by-product of some of the discourse about responsibility, relevance and the strong pursuit of the impact of research in management, social science and more broadly. Just as looking narrowly at the weather in the example is misleading in assessing climate change, looking at narrow and short-term effects of, for example, social reform may be gravely misleading.

There is no lack of justified reasons to critically examine the incentives and practices shaping current research in social sciences, management and elsewhere. The distortions produced by a heavy reliance on publication counting are clear: it produces incentives to artificially slice publications and to inflate citations. And it seems clear that these hazards of malpractice are the strongest in areas where the pressures for quantifiable output are also the strongest.

It is clear that these incentives are crowding out efforts to seek the attention of a broader audience, be it via broader readership of scientific writing or parallel dissemination to practitioners.

While I am convinced that the route from scientific writing via specialized knowledge to the teaching and engagement pursued by most researchers is a viable one, the quest for better outreach is undoubtedly justified. The observation that these are important concerns and the ambition to push the ecosystem of research away from the starker manifestations of them are unobjectionable. What concerns me, however, is the combination of two aspects of this: the subtext that free intellectual inquiry is somehow arcane; and the narrowness of the goals that “responsible research” is supposed to further.

Such goals may include poverty alleviation, gender and social equality, inclusion, fair wealth distribution and a responsible financial sector. I consider all these goals to be important in one form or another for any progressive society and indeed for any elements of sound global governance. It is not clear, however, what this message means in the context of the responsibility of research.

It seems to me that this enumeration of goals is largely superfluous since I believe that most researchers are indeed pursuing inquiry with the aim of improving the world.

Even so, it risks imposing a kind of political correctness on research agendas that may constrain the pursuit of an understanding of the complexities of social institutions and ultimately hamper progress. And, indeed, the talking points of the agenda may reinforce a hollowness in some of the discussions and speeches that surround research.

A point of note for clarity is needed here. In this context the pursuit of profit and the role of research in furthering such pursuit are contentious.

While the pursuit of profit certainly sometimes leads in other directions, I rarely see research as a guide to exploitation and corruption.

The upshot is that the responsibility discourse clashes with parts of my worldview, a view that also stems from a quest for a better world, and a view that like the one underlying research responsibility is too broad to be corroborated by decisive and direct evidence.

In spite of threats and challenges, we live in a time that has seen a dramatic reduction of severe poverty globally, be it measured indirectly by income or directly by tangible phenomena such as child mortality; this is true in absolute terms in a world with a growing population. There are highly relevant measures of income and wealth distribution, mostly but not only on a global scale, that point to decreasing dispersion. These measures are certainly not exhaustive descriptions but they show parts of the picture.

A recent article by Julius Probst, a PhD student at my own institution, “Seven charts that show the world is actually becoming a better place”, appeared in The Conversation, published January 4, 2019. Moreover, to explain this development, one must, in my view, appeal to developments and interventions that do not adhere to the spirit of responsible research. Examples include the “green revolution” and the research aiming to intervene substantively in nature and in natural selection, and the neo-liberal consensus about basic economic policy including a fair amount of reliance on markets, constraints on government intervention and subsidization, the latter not only to balance budgets but also to reduce the scope for corruption.

These assertions emanate from my own world view rather than crystal-clear evidence but the thrust of that evidence seems much more strongly corroborated than, for example, the assertions about finance and economics as the culprits of the most recent financial crisis, a presumption demonstrated liberally in many quarters, including those of the responsible research persuasion.

Genetic engineering, deregulation, and limits to subsidization, and more fundamentally the very acknowledgment of progress in a world still seeing hardship and suffering, all seem to some extent to collide with the assertions that pervade the writings of the responsibility discourse.

So what is the conclusion? Basically, a caveat. With good reason, we seek to promote impact and relevance, action and sometimes activism. The same goes for altering the forces and incentives within the ecosystem of research. This is important and sound. But when doing so, there is every reason –and indeed a responsibility I would say – to nurture the freedom of inquiry and to avoid creating self-imposed restrictions of having to justify research with narrow social benefits.

And it is part of the responsibility of research, and all the more of academic leadership, to stand up for a rigorous understanding of the real forces at work and the real trade-offs involved, be it in the context of interpreting a cold Scandinavian winter or in harnessing the forces that can be set to improve the world.

I am grateful for helpful comments from Mats Benner, Olof Johansson Stenman, and Anne S. Tsui. 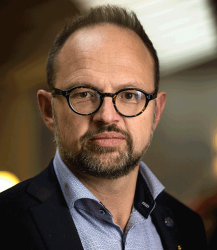