Haier as a quantum organisation

The management model used by most large organisations and many smaller ones was conceived by Frederick Taylor in the early 20th century, to meet the needs of the Industrial Revolution. The world in which companies operated at that time was very different from that of the 21st century. Things were simple and more stable, change was slow and seemed predictable, markets and supply chains were more localised and isolated, communication far slower and more restricted, employee and customer expectations lower, and technology was almost wholly machine-based. Today, business leaders are struggling to thrive in a world that is complex, unstable and uncertain, often chaotic, characterised by rapid change and constant innovation, and globally interconnected. Communication is instant, and quantum physics has given rise to all the new digital technologies, new materials, and new manufacturing processes that business relies on in the 21st century. Many feel that Taylorism no longer serves business needs and are calling for a new management model. I believe that Quantum Management Theory, as implemented in Haier’s RenDanHeYi Management Model, meets that need.

Taylorism, the basis for all traditional management theory, took its inspiration and its organisational model from Newton’s 17th-century mechanical physics, and the general world view (or paradigm) to which it gave rise. Newton saw the universe as a giant machine. It was simple, law-abiding (deterministic) and predictable; human beings were unique and distinct from both ‘nature’ and the cosmos; human beings regarded themselves as privileged and ‘nature’ as a resource to be exploited. Just as the cosmos was structured hierarchically, human beings were naturally sorted into a hierarchy of potentials, roles, and functions – with the ‘higher’ governing the ‘lower’. All these assumptions were built into the management of a Taylorian company. Just as Newton saw the universe as a giant machine made up of separate atomistic bits, so Taylor opined that the organisation should function as a well-oiled machine, divided into atomistic separate, functional ‘divisions’ organised hierarchically and controlled from the top with well-defined bureaucratic rules.

But Newton’s physics was replaced in the early 20th century by quantum physics, and a new theory of how the universe operates and how it is constructed. Entangled quanta of energy replaced Newton’s isolated and material atoms. Heisenberg’s Uncertainty Principle replaced Newtonian determinism. Simplicity and stability were replaced by complexity and dynamic, constant change. The separateness of the human observer was replaced by a participatory universe in which the observer and the observed were a co-creative entity. Human beings were not separate from ‘nature’ and the universe after all. Instead, our questions, our observations, and our experiments play an active role in making the world – something we now realise all too clearly from our destructive role in climate change. And the later discoveries of quantum science’s offspring, complexity science and quantum biology, have demonstrated that we human beings are living quantum systems (‘complex adaptive systems’) – made of the same stuff (energy) that everything else in the universe is made, and our ‘stuff’ is organised and acts according to the same principles as all life on earth, both plants and animals. Quantum physics has thus given rise to a new paradigm that calls upon us to rethink everything, including the management of companies.

Quantum Management Theory, itself a new management paradigm, takes its inspiration and lead from the defining ideas and principles of quantum physics, and it sees companies as quantum organisations – living quantum systems, social examples of the complex adaptive systems described by complexity science. Quantum organisations are holistic, everything is interconnected, ‘Zero Distance’. They are constantly evolving and redefining themselves through co-creative dialogue between the company’s employees and its customers and between the company and the wider external environment – other companies, society, the planet. Like all living quantum systems, quantum organisations are also self-organising, calling for both hands-off, non-directive leadership and the removal of stifling bureaucracy. They also call for removal of hierarchy and the formation of small, self-organising, multi-functional teams in which all employees can reach their full potential. And, finally, because quantum organisations are human systems, the purposes, values, aspirations, and motivations of people working in them are seen as an important part of their system dynamics.

Haier was the first large global company to transform itself into a quantum organisation. It did so, starting in 2012, by putting its pioneering and revolutionary RenDanHeYi Management Model in place. RenDanHeYi is Quantum Management in practice. Indeed, in ways that I shall now describe, Haier has used RenDanHeYi to implement every one of the key defining principles of both quantum physics and Quantum Management.

• Self organisation: Both the quantum universe and complex adaptive systems are self-organising, ‘nature’ has neither hierarchy nor bureaucracy. Quantum Management calls upon companies to do away with control from the top, rid themselves of bureaucracy and middle management and to allow their workforce to self-organise. The Haier CEO has surrendered all-controlling power, seeing his role as an inspiring facilitator, serving those he leads. Haier cleared out all bureaucracy and middle management, and the organisation now consists of 4000 independent, self-controlling, self-motivating and self-rewarding small microenterprises. Former, mere ‘employees’ have become ‘entrepreneurs’.

• Holism: In the quantum universe, everything is interconnected, ‘entangled’ as it were, with everything else, and a principle of Zero Distance applies in every quantum system and the cosmic system as a whole. Quantum Management calls upon companies to break down borders and boundaries (siloed work functions), and to build networks of cooperation and co-creation. ReDanHeYi itself is roughly translated as ‘value to employee aligned with value to customer’. Each microenterprise has an intimate, cooperative and co-creative partnership with its customers, Haier has become an ecosystem in which each microenterprise, now called EMCs (‘ecosystem micro communities’) is in a cooperative and co-creative partnership with others, and this internal ecosystem now embraces an external ecosystem of outside companies with whom temporary, mutually beneficial partnerships are formed. With RenDanHeYi, there are now ecosystem brands for scenario products made by several EMCs internally, or externally with others, and Haier has now even introduced an ecosystem economy.

• A universe made of energy: Our material universe is actually a universe made of quanta of energy bound together in a relationship. Matter is really just concretised energy. Quantum Management calls upon companies to be energy systems – dynamic, flexible, responsive, and adaptive. Haier calls its EMCs ‘energy balls’ because they have exactly these qualities. The company as a whole is a system in constant, dynamic change, each part responsive to other parts, to changing customer needs and to external challenges and opportunities. RenDanHeYi reinvents itself constantly.

• Exploratory: Quantum systems evolve by constantly sending out feelers for the future (‘virtual transitions’). Each is an experiment to test the best way forward. Quantum Management calls upon companies to constantly innovate, and thus to encourage experiment and allow risk. Each of Haier’s 4000 independent EMCs is an experiment, each a feeler into the future, an engine of innovation. Allowance is made for failure, if one company does not succeed, there are many others that will. Haier is a company of startups.

• Waves and particles: All quantum entities are both wave-like and particle-like at the same time. As particles they appear separate and can act independently, and yet as waves each is connected to all the others and to the whole. Quantum Management urges companies to be both particle-like and wave-like. And with RenDanHeYi, each of Haier’s 4000 independent EMCs is an individual functioning company in its own right, a point source of action, while at the same time each is a participating member of the larger company ecosystem.

• Infinite potential. The source and underlying reality of everything that exists in the universe is the quantum vacuum. The vacuum is a ‘sea’ of infinite potentiality. Everything is possible. Quantum Management calls upon companies to realise more of their potential. Haier was founded on Ruimin Zhang’s conviction that every employee has infinite potential, and he designed RenDanHeYi to enable them to fulfil this. The self-organisation, the freedom to experiment, and the openness to new ideas means that anyone can set up a new EMC, and each EMC is like a net dipped into the sea of infinite possibility with the potential to bring up something new. A company that began as a domestic appliances company now also deals in clothing, food, wine, real estate, agriculture, finance, health care, and healthcare equipment. And RenDanHeYi allows infinite expansion!

• Purpose: The quantum universe has a sense of purpose and direction – to form ever more relationships that create ever more complexity and thus ever more information. Quantum Management finds the equivalent of this drive towards growth in a company’s sense of purpose. RenDanHeYi expresses its purpose in its commitment to enabling every individual to fulfil his/her potential, to bring every customer high quality products and excellent personal service that meets their needs and enriches their lives, while serving the wider community and the environment.

In all these ways, Haier has succeeded in its vision to become a quantum organisation, and RenDanHeYi is Quantum Management in practice. 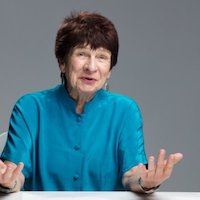 Danah Zohar
Danah Zohar is Visiting Professor at the School of Economics and Management at Tsinghua University and at the China Academy of Art, author of The Quantum Leader and Zero Distance, and the originator of Quantum Management Theory.

Digital transformations fail to meet their original objectives at a rate of 70% to 95%, with an average of 87.5%. What is the learning curve for #digitaltransformation, and what are the three states required for success?