In November 2001, the Steering Committee (SC) for the EFMD General Assembly – to be held ahead of the Global Forum on Management Development the following year – met in Brussels. The group discussed the future of business and management education in the light of September 11 and early information and budding worries regarding unethical conduct at the two corporations World.com and Enron.

Putting aside regular topics for annual meetings, responsibility in a global perspective became the focus for the discussion. It was decided that global responsibility should be the theme for the meeting, and the format should be to invite all participants to join in inclusive discussions. What meaning would they give global responsibility – from a personal or professional perspective? What would be the implications and practical consequences of that meaning? What support would they welcome from EFMD in the work they foresaw?

After the SC meeting, the communication director of EFMD googled the General Assembly theme “global responsibility”. No hits.

A manifesto on global responsibility 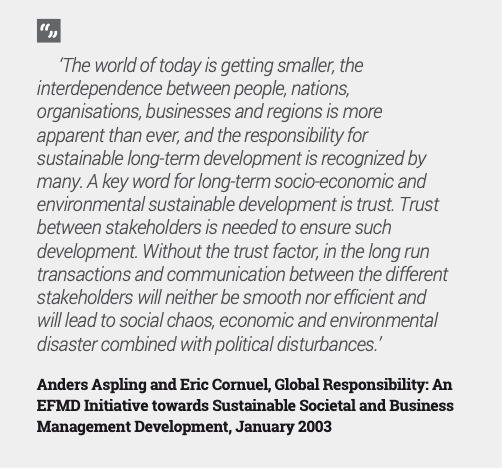 At the Global Forum for Management Development in Bangkok the following year, an EFMD President’s Task force prepared a manifesto on global responsibility. It was to be finalised based on the work at the General Assembly and presented at the opening of the Global Forum.

The General Assembly met in Bangkok on 9 June 2002 and thereafter presented the EFMD Bangkok Manifesto on Global Responsibility at the opening of the 2002 Global Forum on Management Education.

It was evident from the work during the Assembly that Global Responsibility was given different meanings by different people – also depending on where you come from. It was concluded that there were several interpretations of the concept of Global Responsibility. They all seemed to converge towards ensuring long-term sustainable development of society at large.

The Assembly acknowledged that:

The Assembly recognised that the education of globally responsible leaders and decision-makers and the development of responsible corporations and education institutions are sine qua non conditions for a European sustainable development strategy.

At the opening of the General Assembly, I stressed that ‘there is a growing realisation that we need to think and act with new perspectives in mind – ecology, health, social welfare and sustainable economic development – as we make way for the ‘seventh generation’. Global responsibility is about what we believe to be good and right.

‘What then is good and right? There is no single answer to this question. My personal answer would be: To act in the interest of the common good – with the aim that all people will be able to develop to their full potential.’

Again, it was obvious from the work and the comments during the General Assembly that Global Responsibility has different meanings to different people in different contexts.

Thus, as a concept – and in action – Global Responsibility should be applied with a continuously emerging contextual meaning.

The Bangkok Manifesto led to a Global Responsibility position paper being presented at the EFMD Deans & Directors Conference in January 2003. In November of the same year, the United Nations Global Compact (UNGC) and EFMD signed an MoU for collaboration and took action by inviting and selecting a group of 21 schools with business partners to join in hands-on development of the next generation of globally responsible leaders.

In 2005 the 21 schools and businesses published “Globally Responsible Leadership: A Call for Engagement”, while inviting more schools and businesses to the work they had begun. The Globally Responsible Leadership Initiative (GRLI) was founded, and two years later it became a not-for-profit foundation of public utility under Belgian law. Its governance structures and processes build on its values, purpose and guiding principles, with an administrative board giving strategic direction and securing sound funding and finances. The partners are driving the mission and purpose of the foundation and deciding on issues regarding activities and focus through its partner council and its group of guardians. Later, at the UN Global Leaders Summit in 2007, the UNGC and its co-conveners AACSB, ABiS, Aspen Institute’s Business and Society Program, EFMD, GMAC, GRLI and Net Impact launched the Principles for Responsible Management Education (PRME).

After one year of intense work the pioneering schools and businesses calling for a globally responsible leadership made the following core conclusions:

‘The new global business context requires a definition of business that encompasses corporate aspirations, responsibilities and activities in realistic and contemporary terms that go beyond purely financially focused explanations. The purpose of the globally responsible business is to create economic and societal progress in a globally responsible and sustainable way.

The leadership required now, and in the future, can be described as globally responsible leadership. This is the global exercise of ethical, value-based leadership in the pursuit of economic and societal and sustainable development. It is based on a fundamental understanding of the interconnectedness of the world and recognition of the need for economic and societal and environmental advancement. It also requires the vision and courage to place decision making and management practice in a global context. 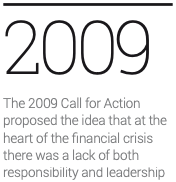 Decisions made by globally responsible leaders rely both on their awareness of principles and regulations and on the development of their inner dimension and their personal conscience. These characteristics can be informed and developed through dialogue and debate. Guiding principles that establish a starting point for globally responsible leadership include: fairness, freedom, honesty, humanity, tolerance, transparency, responsibility and solidarity; and sustainability. These are not fixed ethical points but need to be constantly refined and developed.’

In 2009, leading up to the PRME Global Forum, GRLI formulated a Call for Action on Globally Responsible Leadership (GRL). By then GRLI had been engaging in advocacy, execution of practices, and thought leadership/concept development for close to five years. Leading thinkers and researchers had contributed, and, for instance, the concept of whole-person learning was rapidly developing conceptually and in practice.

The 2009 Call for Action proposed the idea that at the heart of the financial crisis there was a lack of both responsibility and leadership. ‘We need more responsible leadership to implement a more comprehensive model for sustainable development, and this requires a profound change in individual mindsets and behaviours as well as overall corporate culture. What is necessary is that both individuals and corporations assume their responsibility towards the Common Good.’

Globally responsible leadership demands that this cultural change and evolution of mindsets should be based on revisiting three areas:

First, entrepreneurship and the raison d’être of the firm; second, ethical fitness and leadership as embedding and catalysing values and responsibilities in the organisation; and third, corporate statesmanship as broadening the debate and dialogue with society at large.

The 50+20 Agenda: Management Education For the World report to the Rio+20 Summit 2012 is grounded in four dimensions of globally responsible leaders:

The vision of the 50+20 Agenda is to enable business organisations to serve the common good, to educate and develop globally responsible leaders, and to engage in the transformation of business and the economy.

Since 2002, several views and contributions as to what leading responsibly means and requires have been developed as part of a growing field of research and study. They all add to what was presented in 2005 and in different ways they contribute to thinking our way into acting more responsibly and to acting our way into thinking differently about the meaning of global responsibility and globally responsible leadership.

In 2009, we believed a new practice was being shaped. An education and a “school” where

Today, global responsibility and globally responsible leadership are integrated as espoused ambitions of many learning institutions. However, it is not as easy to find them as theories-in-use. 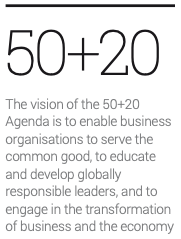 Hand in hand with a changing local, regional, and global context it is impossible not to be concerned. Diversity has been recognised for the crucial value it provides for effectiveness and sustainability, and inclusion is a must for learning, understanding, and development.

Recently we have seen an alarming IPCC report, entered a third year of a pandemic, and witnessed an unprovoked military invasion of a free and independent nation – and we are witnessing the consequences as they spread and ripple across the globe.

It certainly is a time where the need for global responsibility is more evident than it has ever been.

The inquiry into Global Responsibility and our strivings to make it real in the way we live, learn and lead is continuing relentlessly – individually, organisationally and systemically/holistically.

So many years have passed. The work is more urgent than ever, and so much remains to be done. Even if the end of globalisation the way we’ve believed it to be for three decades has come to an end.

The academic community plays a crucially important role in transcending boundaries and enabling collaboration and learning across borders. It plays an utterly important role in connecting people and cultures – not least to provide all the care we can for every one of us, no matter who we are and where we come from.