Enabling models of inclusive growth: Addressing the need for financial and social inclusion

While poverty is falling, the gap between the rich and poor is getting wider and more and more people are being excluded from the means to better themselves. Yuwa Hedrick-Wong and Howard Thomas look at ways to include them.

To advance inclusive and sustainable growth, we need to address the puzzle of a simultaneous increase in wealth disparity and a decline in poverty. Why are so many people in the world steadily getting ahead while others are being left farther and farther behind? Why do market forces seem to be working well in some places but not so well elsewhere? And why are different countries in the same region (and indeed different regions in the same countries) experiencing dramatically diverse trajectories in economic growth and poverty reduction, often in spite of similar macroeconomic policies, institutions, and regulatory regimes?

This economic growth puzzle has compelled a deep re-evaluation of many conventional theories and approaches. And, in so doing, it has stimulated a rethinking of fundamental constructs of economic growth itself.

At the heart of the puzzle is the challenge of understanding productivity. The standard economic models traditionally treated productivity as somehow ‘external’ to the economic system, something that just happens as a result of technological changes. Before long, however, even the most pig-headed economists came to realize that sound economic analysis is needed to account for technology and productivity.

What evolved next is the so-called endogenous growth models that explicitly incorporate technological progress as part of the economic system. There are two main variants: The first is to tie the rate of technological progress to certain macroeconomic conditions, such as investment in human capital, research and development expenditures, and indicators related to macroeconomic stability and so on. A second variant focuses on entrepreneurial behaviour and conditions under which market competition is intense, which can lead to further creative destruction.

While representing a major improvement over their predecessors, the endogenous growth models remain inadequate, being very top-down and they can take us only so far in decoding the dynamics of productivity growth. In the past decade, advances in a new field of research known as economic complexity, led by Ricardo Hausmann and his team at the Center for International Development at Harvard University in the US, has made it possible to understand better how technology and productivity interact and drive economic development.

The research on economic complexity highlights a key feature in today’s economic process – the need for economic agents, be they individuals, firms, or even countries, to collaborate in order to be productive. Such collaboration typically takes the form of being connected to a range of vital networks that are powerful enablers for raising productivity. The fact is that modern economic production requires a very large set of complementary inputs. For example, Figure 1  illustrates how full access to complementary assets should enable individuals to gain financial and social inclusion and increase their productivity. 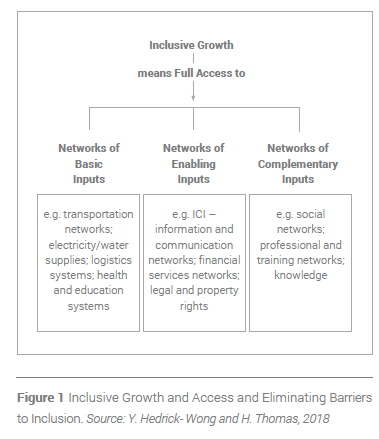 Then there are the critical networks for accessing information and for obtaining important services such as health, education, banking, and finance. There are also the more intangible, but no less critical, social and professional networks for accessing skills and the know-how that reside in people’s minds. How well an economic agent is connected to these vital networks determines fundamentally how productive it can be. These networks can also be understood as the conduits through which knowledge is transmitted and shared. Depending on the nature of that knowledge, the network characteristics themselves will also differ as will conditions affecting access to these networks. We can think of knowledge in three different dimensions: embodied knowledge in the form of tools; codified knowledge in the form of information, blueprints, recipes, and manuals; and tacit knowledge, which takes the form of collective know-how.

This decomposition of knowledge allows us to examine systematically how, in regard to each of these dimensions at the grassroots level, individuals are able or unable to access the knowledge they need in order to reach their full productive potential Such an approach, in turn, opens up a whole new way of thinking about inclusive growth. In the dimension of embodied knowledge, which includes all tools, machinery, and physical infrastructure, it is easy to see how many people in poor countries are simply not able to access these networks. Simply, there may not be enough of them or they may even be non-existent.

A lot of the networks of physical infrastructure are also interdependent: without roads, it is difficult to connect a village to electricity (even allowing for sufficient electricity supply, which is typically not the case) and without electricity, all sorts of labour-saving devices and tools will not work. The exclusion from accessing better tools and more efficient infrastructure is a primary reason that the poor are kept at a very low level of productivity. In other words, they are stuck in a poverty trap.

In the dimension of codified knowledge, which includes essential services such as finance, health care, and public services that are made possible by having effective institutions, many networks for service delivery typically have very high fixed costs and low variable costs. For example, in financial services based on the conventional banking business model, a relatively high fixed cost is incurred in serving a new customer. And the poor being poor, they are unlikely to generate sufficient business volumes to justify the high fixed cost incurred in serving them. So, they are excluded. The third dimension – knowhow – is even more problematic. Knowhow is everything that we know how to do but cannot explain. Skiing is | know-how. We learn how to ski by skiing not by studying the physics of skiing. A ski instructor cannot download his/her skills directly to a student skier.

Consequently, the diffusion of collective know-how is far more difficult than the diffusion of embodied and codified knowledge. Yet more sophisticated and higher value-added economic activities typically require many more inputs in terms of know-how. Lack of access to knowhow is a serious constraint of productivity growth and economic development.

In modern economic production, the more complicated the task, the more important is the dimension of knowhow relative to embodied and codified knowledge. Exclusion from accessing networks of complementary inputs in the form of know-how is therefore particularly detrimental to productivity. Because the networks of complementary inputs in the dimensions of tacit knowledge are made up of people, not machinery or electricity supply, discrimination on the basis of gender, class, caste, region, dialect, religion, and so on can play a big role in suppressing productivity. Whether it is poor infrastructure, labour market rigidity, monopolistic practices, restricted access to finance, collusion of vested interests, or stifling regulations (most likely some combinations of them), it is clear that innovative microentrepreneurs and successful firms alike in many poor countries are prevented from expanding, which reduces their potential growth of productive employment, thereby leading to lower productivity in the overall economy.

Through the lens of economic complexity, we can now re-interpret poverty as people being trapped in low-productivity activities due to a lack of access to any number of the vital networks that are powerful enablers for raising productivity. We can also address the puzzle of why there has been a simultaneous increase in income disparity and a reduction in poverty. The dramatic reduction in poverty that the world has seen in the last half-century came about because hundreds of millions of people who used to live in poverty were connected to many of the vital networks that enabled them to raise their productivity.

China is a prime example where rapid improvement in infrastructure, the movement of tens of millions of migrant workers from rural areas to cities, and massive influx of know-how and the often mandatory knowledge transfer, that arrived with foreign direct investment created endless opportunities for poor peasants to connect to such networks, which then dramatically increased their productivity.

At the same time, however, many countries, and segments of the population within countries continue to fail to access many of these vital networks so poor people are stuck in low-productivity traps. As a result, the distance between the richest and the poorest has continued to grow despite a massive reduction in poverty.

From this perspective, inclusive growth is all about overcoming barriers of exclusion. Some exclusion is due to the nature of the network itself, providing banking and financial services as mentioned above, for example, though the fixed cost could be lowered, or made variable, through the increasing adoption of Fintech solutions. In this context, we can conceptualize inclusive and sustainable growth as a process of democratising productivity. Just as citizens in a democracy have a set of participatory rights in choosing their leaders and setting parameters for public policies so inclusive growth means extending basic rights for all to access and participate in the vital networks of infrastructure, services and know-how. And in order to democratise productivity, we may need to work with governments under certain conditions but amplify market forces in other contexts. 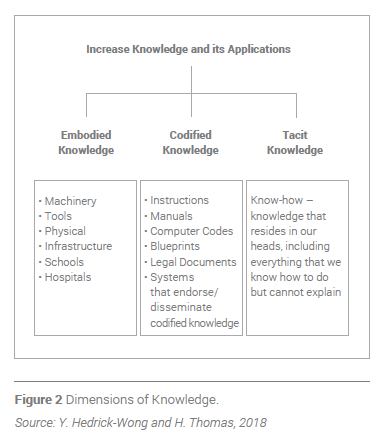 In fact, governments and markets need to function as complements in order for inclusive growth to succeed. Government regulations are needed to create standards, protect property rights, and enforce the rule of law so that markets can operate efficiently. And governments play a major role in the production and protection of what is referred to as public goods: infrastructure, health, education, the safety of consumers, and the environment. The bottom line is that markets and governments are complements in inclusive growth, not opposing substitutes.

The focus on democratising productivity also means that we need to be flexible and pragmatic, deploying different development models in specific circumstances in order to raise productivity for all. In other words, what works well in China may not be appropriate in Africa; and, indeed, what has worked well in China in the past may become counter-productive in the future.

Ultimately, seeing inclusive growth as democratising productivity allows us to focus on driving growth through higher productivity across the widest possible spectrum of economic agents in a society. Hence improving income equality is a welcome result, not some sacrosanct priority to be realised even at the expense of economic growth. 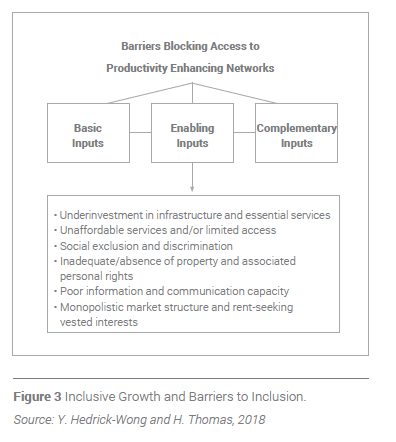 Instead, democratising productivity means dismantling barriers of exclusion to create equal opportunities of access and connectivity (see Figure 3), even though it is inevitable that some economic agents who are more energetic and enterprising will be able to accumulate more resources and become connected faster and better and become more productive than the rest.

However, under conditions of inclusive and sustainable growth (absence of barriers of exclusion), when some parts of the society are enjoying faster growth in productivity than others, it results in a ‘win-win’ situation. The more productive segments of the society would generate new opportunities for more productive activities that would benefit even those who are slower moving and less successful, pulling the entire society along. In this regard, democratising productivity is also the most productive way of improving income equality.

This article is an edited extract from Inclusive Growth; Addressing the Global Challenge of Social Inequality and Financial Inclusion (Emerald Publishing 2019) by Yuwa Hedrick- Wong and Howard Thomas.

Howard Thomas
Howard Thomas is the Ahmass Fakahany Distinguished Professor of Global Leadership at the Questrom School of Business, Boston University and Emeritus Dean and Professor at Singapore Management University