Are management scholarship and our universities in crisis? Morten Huse reports.

Several initiatives have been taken during recent decades to show the need to rethink management scholarship, and many warnings have been presented. Many voices are raised against the present publish-or-perish culture (POP-culture) in academia, with criticisms such as: ‘Academia has lost reflection’, ‘Return to meaning’, ‘Academia has become a hothouse for functional stupidity’, and ‘Scholars have become publishing technicians’. There are thus also different initiatives and suggestions for how to change the system. The initiatives vary depending on the people or institutions in question, including variations in disciplinary and geographical backgrounds and traditions, differences in types of actions, variations in purpose or objectives. In this article, I am not arguing about the existence of the crisis descriptions. Rather, I sort these initiatives into a scholarly ecosystem; addressing the institutions, the audience, the message, the channels and the community.

To shift the equilibrium from the POP-culture to true scholarship, we need synchronised actions by key actors. There is a need for champions. It is important to identify the characteristics of the initiating actors, and the type of initiatives they are taking, as well as the global or disciplinary variations that they may represent. 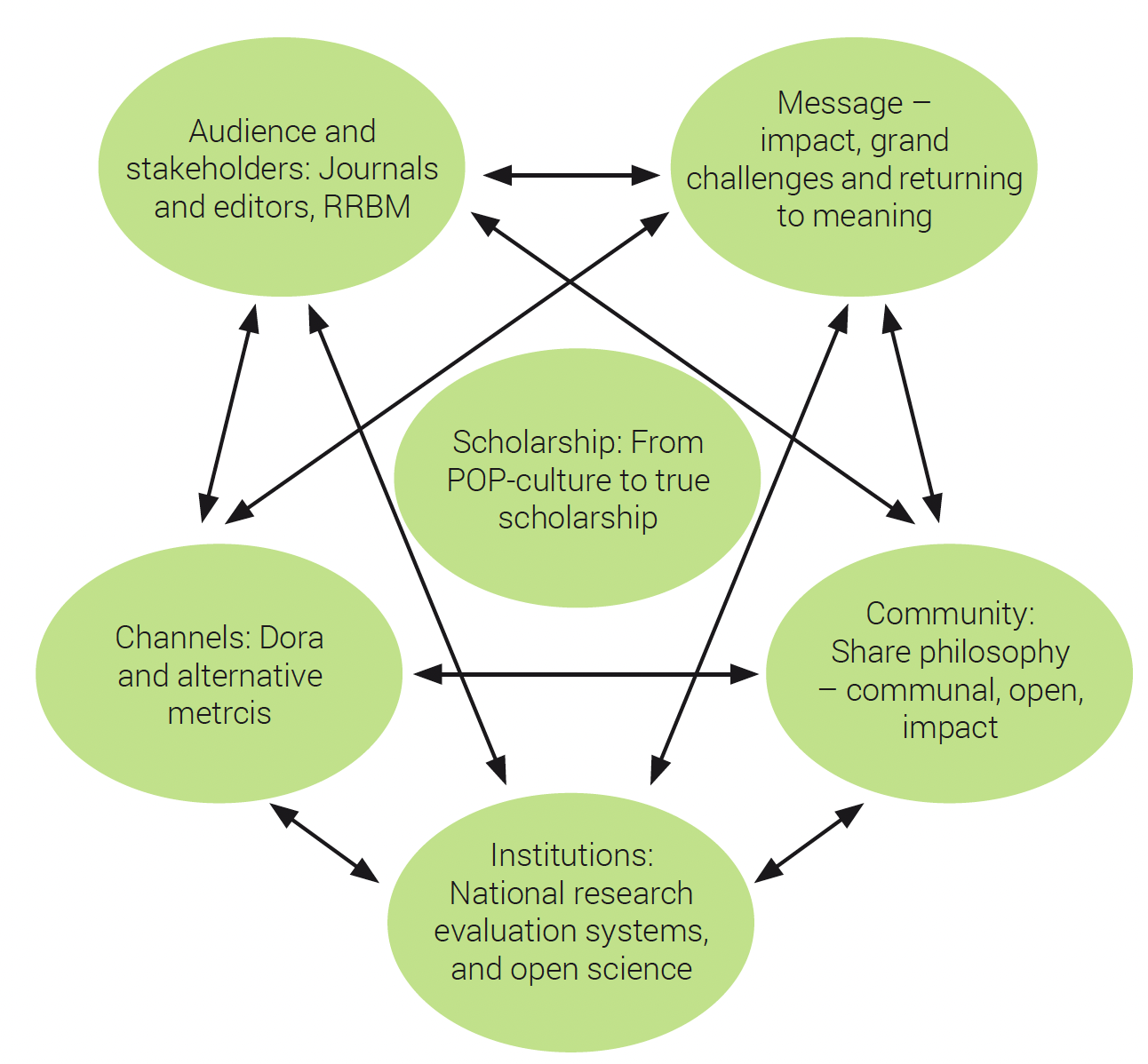 Initiatives to change institutions can take place at several levels, e.g., through national evaluation systems, transnational regulations, accreditation agencies, and various private or voluntary endeavours such as those of EFMD, DORA and RRBM. However, institutional impacts happen over time.

Audience – not only for a narrow group of scholars, but also for practice

There is a wide gap between research and practice in management research. This is not a new observation. There exist various suggestions and initiatives to include other stakeholders than just ourselves, and discussions of the causes and potential solutions to this gap have been widely debated for a long time (Rynes, Bartunek and Daft, 2001).

Journals and editors: Forums or special issues
Journals and journal editors have expressed concern for a number of years about the lack of inclusion of stakeholders in management journals and publications. For example, the number of forums and special issues on academic-practitioner relations has virtually exploded since the turn of the millennium (Bartunek and Rynes, 2014).

RRBM
RRBM is a recently founded virtual organisation (see, e.g., Tsui, 2018) that brings together a growing community of scholars from all over the world. RRBM is supported by many partners, including accreditation organizations as AACSB and EFMD. Its objective is to ensure responsible research with the production of credible knowledge that can be used to inform progressive government policies and promote positive business and management practices. RRBM calls for action to transform business and management research to focus on achieving humanity’s highest aspirations for a better world.

Message – from getting published to meaningful research

Several scholars have campaigned against the lack of meaning in the POP-culture. Some go so far as to argue that a new science of management research is needed (Starkey, Hatchuel and Tempest, 2009). Pettigrew and Alvesson have argued in several publications that we need to rethink our professional norms, and we need to cultivate a more scholarly identity, focusing on the need for meaningful, reflective, and impactful research.

Existential research and grand challenges
It has been suggested that in our research, we should address the great challenges in society. Grand challenges include existential risks, e.g., risks that could bring an end to humanity, such as, for example, nuclear catastrophes due to accidents or war, climate change, destruction of the natural environment, and unintended consequences of artificial intelligence. However, there are also challenges such as the pandemic, inequality, poverty, ecological imbalances, and socio-economic and political crises. We can approach these issues by seeking out new and interesting avenues for research, but even more importantly, by making them the core reason why we do research.

Returning to meaning and polymorphic research
Mats Alvesson has been one of the strongest critical voices against the POP-culture, calling for meaningful research. Alvesson and Gabriel (2013) argue that our research is too focused on ‘gap-spotting’, and that it instead should be path-setting. They argue for polymorphic research, less formulaic research, and a nomadic research trajectory, with the idea that scholars need to be curious.

The key virtues in polymorphic research are openness and curiosity, and the main point of polymorphism is to open up alternative ways of thinking and writing research. Polymorphic research acknowledges uncertainties and doubts, has a method based on reflexivity, aims at non-standardized text productions, and addresses a broad audience.

Channels – the metrics being used beyond publishing in prestigious journals

The use of impact assessments can bring many benefits. However, there are many unintended consequences that may harm scholarship and introduce flaws into the system. One line of discussion relates to metrics and academic ranking, and the way in which ranking systems are leading to scientific misconduct. Among the most powerful initiatives to change metrics come from DORA and Anne-Wil Harzing.

DORA – The San Francisco Declaration
The San Francisco Declaration, also called DORA (Declaration of Research Assessment), highlights certain problems arising due to journal metrics. The ambition of DORA is to change practice in research assessment, which involves changing the academic culture and behaviour to ensure that hiring, promotion, and funding decisions focus on the qualities of the research. DORA focuses on insight, impact, reliability, and reusability rather than what they call questionable proxies. The DORA guidance includes approaching funding agencies and institutions, publishers, metrics providers and researchers. DORA is addressing challenges on a global scale and wants to establish globally supportive communities.

Beyond traditional metrics
Anne-Will Harzing has a reputation for renewing the ways in which bibliometrics can be used to access academic performance. Through several contributions, she has shown the problems of the JIF (journal impact factor) ranking system. Adler and Harzing (2009) have shown that current ranking systems are dysfunctional and potentially cause more harm than good. They show the arbitrary nature of JIF as a ranking system, and they invite the worldwide community of scholars to innovate and design more reliable ways to assess scholarly contributions. They raise critical questions about the choice of publications that are included in JIF, and they argue that the type of publications needs to become more global and comprehensive.

Community – from egocentricity to a sharing philosophy

Many of our scholarly community leaders, as former AOM and EURAM presidents, have voiced the concerns reflected in the initiatives mentioned above. Many commentators echo the idea that the scholarly community should be vibrant and engaged: we should care about each other, and senior scholars should use their experiences to develop younger colleagues. We should believe in the training of scholars, and this is a lifelong training period. It is a key issue for developing a community that enables collective action and change – a community that is educating hearts. This means, in practice, that we should take a life-cycle perspective of scholarship.

Creating a new game with passion and compassion
I have been confronted with a new game of doing research: the sharing philosophy. The sharing philosophy is communal, open, and impact-driven. The communal approach is about community development and programmatic approaches to research. It is not about individual credits. The open approach is about open innovation, and it is holistic. It is an integration of head, heart and hands and underlines the importance of passion and compassion. Working with young scholars and their development is important. The impact-driven approach has a focus on the importance of societal impact and contributions, and the idea that our research community should be directed towards welfare and well-being across the world. It is characterised by working not only for, but also with the stakeholder.

Is this a new game of doing research? Or is this a return to the past of true scholarship? This is not isomorphism or a mere adjustment of the existing game, but it is a rethinking of our professional norms. Scholarship is not something we do, but something we are. This is a call for senior scholars and community leaders to be champions for true scholarship.

This article is based on Morten Huse’s 2020 book Resolving the crisis in research by changing the game: An ecosystem and a sharing philosophy. A detailed list of references can be found in the book. 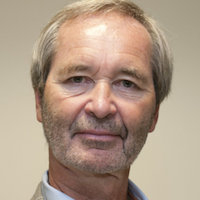